I have been very anxious to get to making sensory bins with the babe. I know he’s not quite old enough for the elaborate sensory bins I am envisioning but I am trying my hardest to find ways to be creative within the limits of babyhood. You see, Mr. C is starting to get bored with all the baby toys that are currently lying around the house so I am trying to find new and interesting ways of entertaining him without spending a fortune and/or acquiring more toys that he will again get bored with. I was so thrilled to finally try this with C.  I even thought of a cute name for it.  The Alphabet Soup sensory bin! If only he were older and learning letters. Hmmm… I will have to make a mental note of that for later. Can you tell this mama is so proud of herself lol?

Supplies for My First Sensory Bin

I’ve had this idea in my back pocket for awhile but have been very nervous about letting the babes (who just turned 8 months) play with pasta of any kind for obvious reasons.  Finally I decided to give it a whirl.  I used the extra large pasta shells (you know the ones that you stuff) and mixed in his Sassy Letter Links

(which he loves by the way). I was hoping by picking the letter links that if he was going to put anything in his mouth it would be them since he likes to chew on them anyway.  I also threw in a small Silicone Colander

that he likes to play with.

Even though I used the big shells I was still a tad worried about him biting off a piece.  I WATCHED him like a HAWK the entire time just waiting at the ready to fish a piece of pasta out of his mouth. Thankfully I didn’t have to. He did taste test the first few shells.  It was actually quite comical because he would take one shell out, mouth it a bit, put it down, take another shell out and repeat the process. After 5 or 6 shells he gave it up and just chewed on the letters.

First he enjoyed just taking the shells out of the bowl….
What are these things anyway? 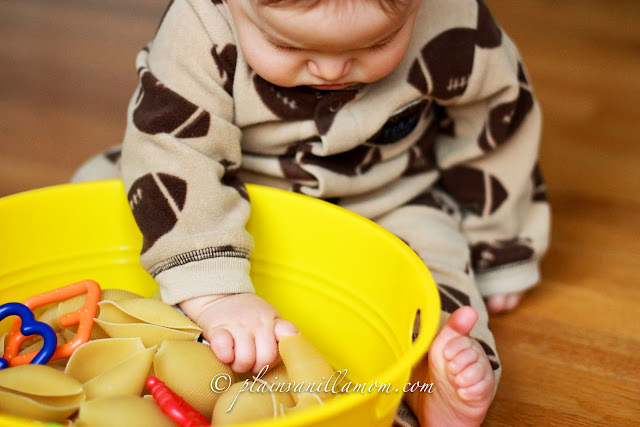 It was cute to watch him inspect them and try to figure out exactly what they were.
There’s nothing quite as cute as a curious baby. I think he liked the sound they made when he went digging in the bowl. Eventually he figured out he could dump the entire bowl. 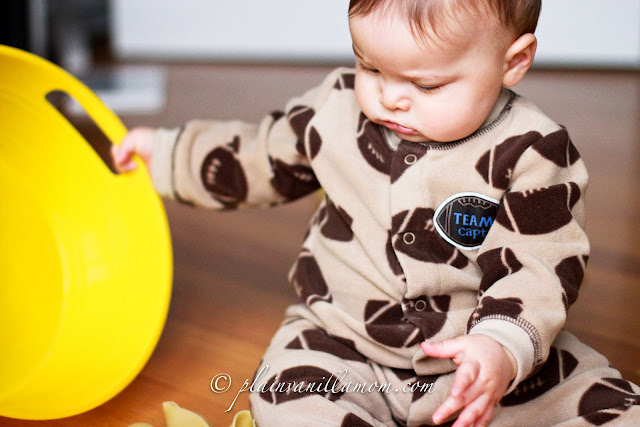 And that the bowl made a good drum. It ended up being a good motivator because once he emptied the bowl he tried to crawl around and collect the shells. He’s not quite crawling yet….but he’s getting there and it did get him moving 🙂 If you are thinking of doing this with your little one use your good judgement and supervise at all times.  In general I would  recommend this activity for a babe slightly older than C. I will have no problem pulling this one out again when he’s 10 or even 12 months old and beyond. The bigger shells are the PERFECT size for little hands. I decided to try it because 1. I wanted to give him a new experience and 2. I wanted to see how he would do with something like this, if he was ready for it.  I felt comfortable enough because although he sucks on and mouths almost everything, he doesn’t have enough teeth yet to really bite into anything so ultimately I didn’t worry too too much that he would be able to bite off a chunk. If he gets really into an activity he’s more interested in playing than chewing anyway.  He without a doubt completely enjoyed this one. You know your child best so play accordingly!

You can find the rest of the sensory bins in the “my first sensory bin” series listed below.