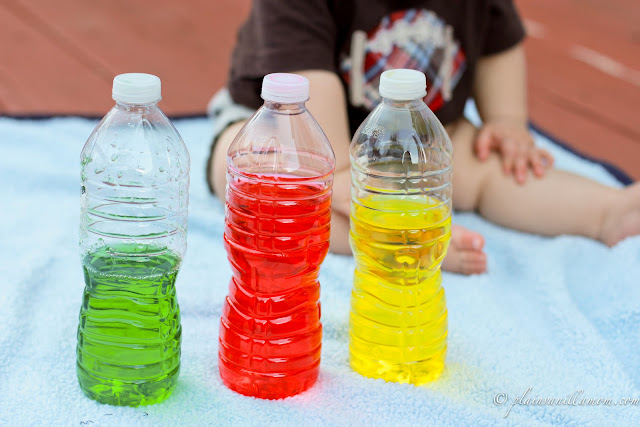 Today I decided to try something a little different with the munckin man. I wandered around Babies R Us this morning looking for a new toy, but nothing quite fit the bill so when we got home I decided I would try to concoct a new experience for the little guy myself. There was a water bottle sitting on my kitchen counter and that seemed to have potential, then I remembered all the green food coloring left over from St. Patrick’s Day. But why stop with green? So, I ended up coloring three bottles….red…. yellow (because I think that’s his favorite color)…. and green.  (I know…it was not lost on me that this has some sort of ‘stop light’ game potential with an older child. I’m filing that thought away for later). I put different amounts of water in each bottle because I’m hoping he’ll pick up on the fact some are easier or harder to lift, roll around etc.. Very simple. I set us up outside on the deck just in case we sprung a leak or had a spill. (Bonus points for taking the activity outside).

I set the three bottles up in front of him and let him go to town.  I was curious to see which one he would go for first. Maybe yellow?  He did!  Score 1pt for Mom knowing her kid 😉  Then of course, yellow went in the mouth, as does everything these days. He tried that for a little while while I became nervous about the cap hazard and then decided he green looked good. Green went in the mouth too. uuuhh.frazzled Mom nerves kicking in.  I wondered if he wondered if green would taste different?  He played with green and yellow for a little bit and then eventually went for the red. (btw…once he “tasted” the first couple bottles he never put them in his mouth again). I would obviously supervise this activity because of the caps – or find a way to glue them to the bottle). 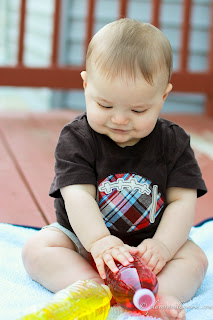 Red made a good drum. 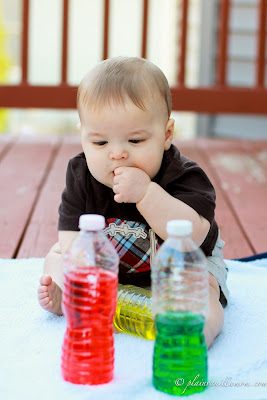 Doesn’t he seem to be saying… “Hmmm, which one should I choose?”
It was a thrill watching C explore. I don’t actually know who had more fun, he, or I.  He was all smiles and I thoroughly enjoyed watching him. You could just see his mind working to figure out what these were, what he could do with them etc. He was LOVING this! He was oblivious to the fact that I was taking pictures because he was enjoying himself so much.  Who needs store – bought toys 🙂 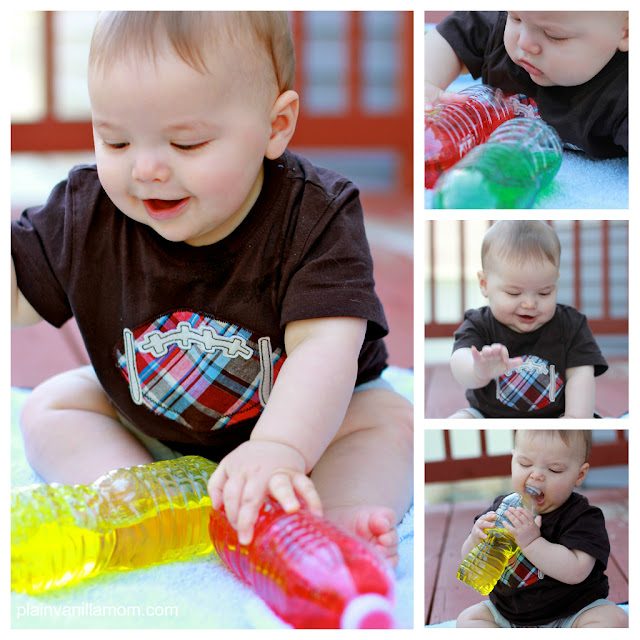